We were sad to hear of the death of Heinz Wolff on Friday 16th December 2017. Heinz was associated with Remap since the 1980s and our President for more than ten years. Each summer he gave prizes at our AGM including the Wolff award which he gave to Remap projects featuring electronics. Here is a tribute from Tony Shipley – a friends and fellow scientist. 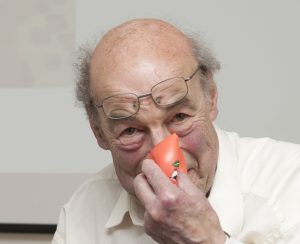 “I knew Heinz as a fellow scientist and as a friend for nearly 40 years.  We first met when he was Head of the Brunel Institute for BioEngineering (BIB) at Brunel University.  Despite the grand sounding title, his Institute was not funded by the University and had to generate its own income.  For this reason, Heinz took to being a TV Personality, and the monies he earned through television appearances went to facilitating research at the Institute.  Through this, the team at BIB was able to pursue research along directions of its own choosing, as well as the work commissioned by client organisations.

One of Heinz’s main enthusiasms was for ‘Tools for Living’, which was an enlightened approach to thinking about the problems of disability.  If we want to make a hole in a piece of wood we need a tool, because Nature has not equipped us with hands that have rotating fingers with sharp hardened ends.  It is precisely the case. so he argued, for a person with no hands at all.  The tool will be the same but the method of holding it and controlling it will be different.  It is no surprise that someone who thinks along these lines should come to have a close affinity with Remap.  Heinz was a great source of encouragement and support to us over the years, in particular when it came to judging and presenting the Annual Awards.

My favourite photograph of Heinz shows him lying stretched across a railway track, without touching either of the rails.  It was no ordinary railway track.  The Brunel campus was built over the alignment of the Great Western Railway’s branch to Uxbridge Vine Street, originally built to the Broad Gauge.  The University had discovered a long disused siding with its track still intact and it was here that the photograph was taken.  Of course, the rails were 7 feet apart.  Heinz was an original thinker in the mould of Brunel.  His last great project which he was working on when he died, and for which he had already raised a million pounds, was not engineering at all but a social enterprise called Care for Care.  Rather as Remap, people would provide help and care for those around them, but in doing so would build up credits in the manner of a Time Bank.  When they in turn came to be in need of care those credits could be cashed in for the services of the next generation of carers.  It was an innovative way of addressing the issue of care costs for the elderly and it had attracted the attention of 10 Downing Street.  If the scheme lives on without him it will serve as a memorial that will outlive The Great Egg Race.

I shall miss Heinz, and so will we all.